The first phase of the City of Brighton’s Grand River Resurfacing Project is scheduled to begin tomorrow.

For the first phase, underground utility work will be done during daytime hours and will require various intermittent traffic shifts of both the east/southbound and west/northbound lanes - which will reduce portions of Grand River to be one‐lane only in each direction.

The project limits are from just east of Cross Street to Brighton Lake Road for the first phase. The paving will be done from the same location near Cross Street to the City limits at Appian Way.

During that time, the City encourages motorists to seek alternate routes. Those that do travel on Grand River should expect to encounter long delays.

Access to all side streets and businesses within the construction area will be available. When traveling in the area, the City asks that motorists drive carefully for their safety and the safety of other drivers, pedestrians and construction workers.

The City anticipates the first phase of the project to be completed in mid‐September.

The concrete and paving portion is anticipated to begin thereafter. Another notice will be sent out advising when that work will be starting.

Details are available in the attached press release.


As two big construction projects wrap up, another one is scheduled to start Monday.

The Livingston County Road Commission advises that Crooked Lake Road in Genoa Township is now back open to the public for use. Crews will remain on site for the final project clean-up over the next few weeks.

In Green Oak Township, Whitmore Lake Road is also now open to traffic but crews will still be out for final clean-up. While that’s wrapping up, a busy intersection in the area will be completely closed for roughly three months.

A roundabout will be constructed at Winans Lake Road and Rickett Road, near the Legacy Center Sports Complex, with work scheduled to start Monday.

Work is anticipated to be completed by mid-November.

Officials have said it’s considered a fairly normal construction project but there will be traffic impacts during different phases of the work. Detour routes will be posted when road closures are necessary during construction. A map is attached. Tentative work schedule -- could be sooner if schedule allows or could be later if rain  happens:

All tentative could be sooner if schedule allows or could be later if rain happens.


Another road project is starting up soon that will bring delays for motorists in Hamburg Township.

The Livingston County Road Commission advises that there will be high traffic impact associated with the project and motorists should expect major delays.

Two-way traffic will be maintained through flag control.

The estimated completion date is next Friday.

Grand River Ave. in Brighton to Be Repaved

In a couple of weeks the city of Brighton will start a nearly two-million dollar joint project between the city and MDOT to resurface Grand River - Brighton’s main east-west thoroughfare. The work will take place from near the Cross Street intersection on the west side to the east city limits at Appian Way. The project is expected to start in the middle-to-latter part of this month.

Cost of the project is pegged at $1,728,500, with the federal funding to absorb $1.415,000 of the cost. The city will pay the remainder of the project — roughly $314,000. That amounts to 18.85% of the project cost. At its meeting this Thursday, City Council will consider a resolution to accept and sign the contract.

Before the project gets underway, the city will so some emergency underground utility work. The work will be performed during daylight hours and will require one lane of east/northbound and west/northbound to be closed. The lane closures will be intermittent and will last for about four weeks.

The city has already approved bond funds to pay for the city’s portion of the project.

According to city DPS manager Marcel Goch, it would be advisable to look for an alternate route, because if you normally take Grand River in your day-to-day driving, you can expect to experience long delays. Access to all side streets and businesses within the construction area will be available.

Goch is encouraging everyone to sign up for the city’s text or e-mail updates by going to www.brightoncity.org/alerts and selecting “general alerts”.

The project is expected to be completed by or before the end of the year.


Paving work on Rickett Road is taking place this week in the City of Brighton and motorists should prepare for long delays.

The City’s contractor will be repaving Rickett Road from the railroad tracks south to the City limits just past Oak Ridge Drive.

The project is scheduled to begin this Wednesday. The work is anticipated to take three days but is weather dependent.

During the paving operations, the roadway will remain open. However, traffic shifts will be taking place and the City advises that motorists will experience long delays.

Officials recommend that motorists use an alternate route during the paving work. 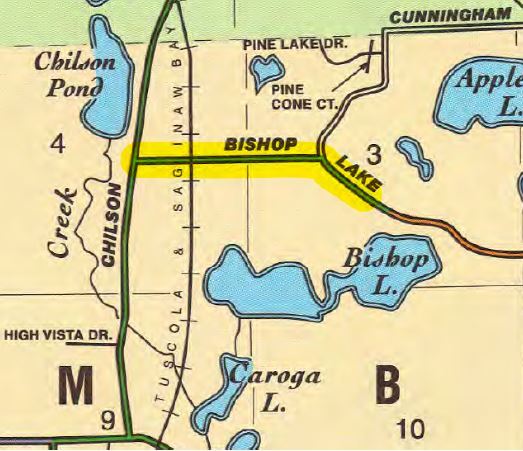 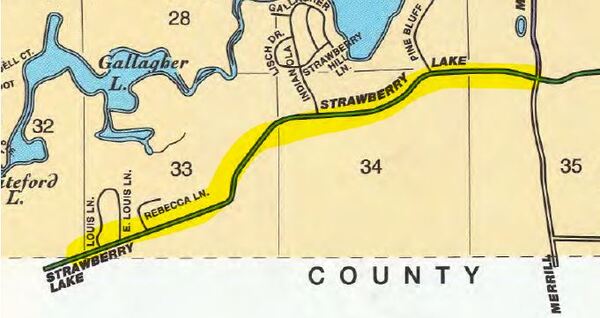 
Some major traffic delays can be expected this week with work planned on two busy roads in Hamburg Township.

Work will be done on Bishop Lake Road from Chilson Road to the end of the pavement. On Strawberry Lake Road, the project limits are from the township line to Merrill Road.

The Commission advises that there will be high traffic impact and motorists should expect to encounter major delays.

Two-way traffic will be maintained through flag control.

Further, motorists are being asked to drive slowly over the fresh chip seal application.

Residential driveway permits and land split/sight distance review applications are NOT available at this time via Oxcart and will only be accepted in person at our office.

Go to www.oxcartpermits.com to create your account.  Effective Monday, June 6, 2022, the LCRC will no longer be accepting paper applications.  Please contact us at 517-546-4250 if you have any questions.


A road closure in Genoa Township has been pushed out to Friday.

Chilson Road will be closed between Latson Road and Crooked Lake Road from roughly 9am to 3pm. The closure is needed so crews can replace a drain underneath the roadway.

Work was scheduled to begin on Wednesday. The Livingston County Road Commission advises that it had to be postponed due to equipment issues.

Signs advising of the closure remain in place. 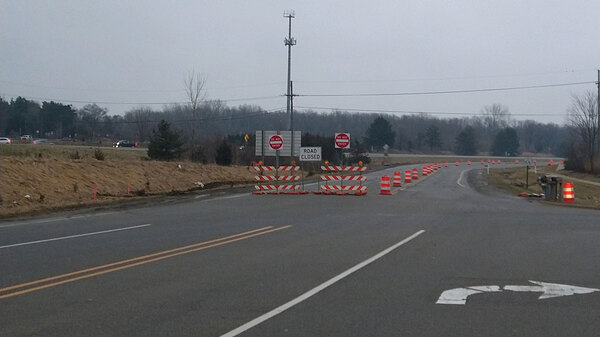 
A major construction project is underway in Green Oak Township that will impact traffic for a while.

Whitmore Lake Road is being reconstructed from Baytes Drive to Lee Road and closed at around 7am Monday. The project is tentatively last through the end of October.

There will be high traffic impact as traffic will be directed one-way only from Lee Road, south to Baytes Drive.

The Livingston County Road Commission issued a revised update and a map with more detail on Monday, which is attached.

All work is weather dependent.


A major construction project that will impact traffic for months in Green Oak Township is scheduled to start next week.

Whitmore Lake Road is being reconstructed from Baytes Drive to Lee Road. As of now, the project is scheduled to begin next Monday and tentatively last through the end of October.

The Livingston County Road Commission advises that there will be high traffic impact as traffic will be directed one-way only from Lee Road, south to Baytes Drive. As can be expected, all work is weather dependent.

A sketch of the detour route is provided. 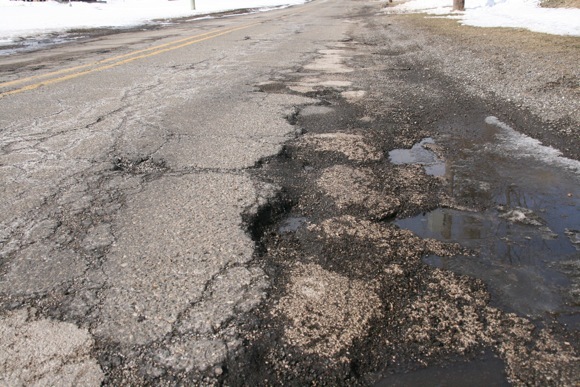 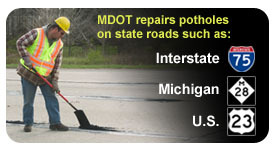 Potholes have been popping up all over with recent storms and repeated freeze and thaw cycles and motorists are being encouraged to report them to the Michigan Department of Transportation. If motorists do encounter any on state roads, they’re encouraged to call MDOT’s Report a Pothole hotline at 888-296-4546 and crews will be sent out to fix them.

MDOT’s Communications Representative for the University Region Aaron Jenkins tells WHMI they are seeing a few more potholes than last year this early on in the cycle but it doesn’t come as a surprise with recent weather. He says potholes are created when snow and ice melt as part of Michigan's seasonal freeze-thaw cycles. Moisture seeps into the pavement, freezes, expands and thaws, creating a gap in the pavement. Then as vehicles drive over the gap, the pavement weakens leading to a pothole.

Any information that is reported is forwarded to MDOT’s regional Transportation Service Centers, which send people out from garages, and Jenkins says they are usually pretty quick about fixing them.

Jenkins said many people don’t realize that calling that number will get crews out there pretty quick so if people see trouble areas, they should call. He added they drive on the same roads and don’t want people, family or friends to have to deal with potholes.

Jenkins noted MDOT will be doing a lot of projects this year so there will be a lot of new roads coming that hopefully will eliminate the need to fix so many potholes. He said that work is attributed to Governor Gretchen Whitmer’s Rebuilding Michigan program in which $3.5 (B) billion in bonds are being issued to take care of a lot of road problems from the past. Jenkins further asked that motorists be careful when driving around construction zones because they’ll actually be starting up a lot of projects in the next few weeks.